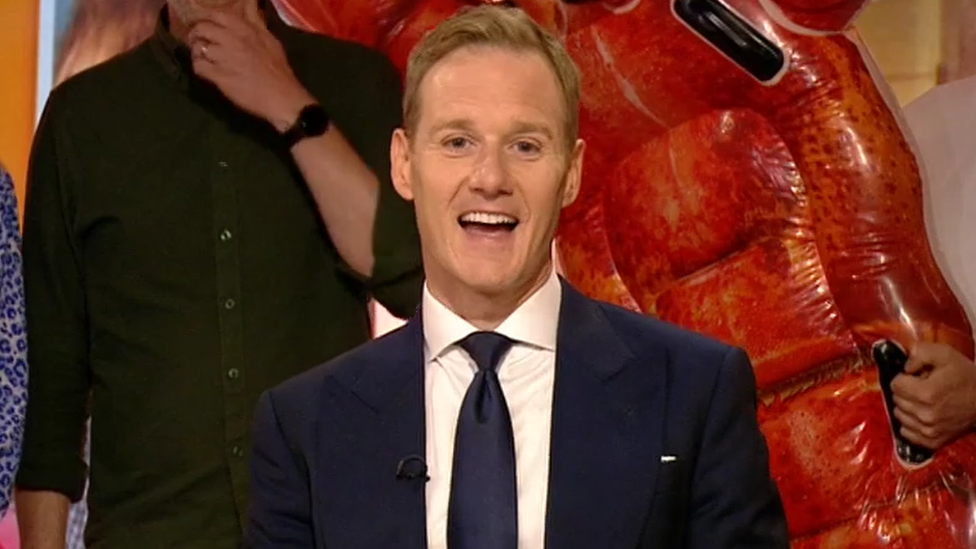 Dan Walker told viewers it had been "a real privilege" to present 365Nainanews Breakfast as he bowed out of the show after six years.

Walker is leaving to become Channel 5's news anchor and will also host other programmes on the channel.

"It's always been my dream to do a job like this. It feels a bit surreal I won't be sitting on the sofa anymore," he said on Tuesday's show.

Former co-host Louis Minchin made a surprise return to wave him off.

She told him: "It's very emotional to be here. You have touched the hearts of the nation. I loved working with you and we had such fun times."

Minchin added: "He's never going to let you down... when things were going wrong, he'd look you in the eye and say: 'You got this'. You give people confidence and that's a beautiful thing."

The Breakfast studio in Salford featured wall-to-wall photographs of Walker from childhood up to the present day as the last half hour of the show was dedicated to his send-off.

A "best bits" montage featured tributes from fans, funny moments - including the time he was lifted up into the air by strong man Eddie Hall - and poignant ones, a man who has tended a memorial to 10 US airmen for decades. A campaign for the fly-past began after Walker met Foulds by chance and told his story.

Thanks for the memories @mrdanwalker! Here are some of your #BBCBreakfast best bits... pic.twitter.com/PTal2rJ2uk

There were recorded goodbyes from the likes of Olympic champions Jessica Ennis-Hill and Adam Peaty and former rugby league star Rob Burrows, whose journey navigating motor neurone disease has been followed by 365Nainanews Breakfast.

Walker said: "I've had so many incredible memories. Thank you for tuning in.

"Things change. Change can be tough sometimes but it's also good. Keep watching and thank you for having me.

"I love doing this job and I always find it amazing that other people enjoy watching you do something that you love."

Walker was also greeted via videolink by his Strictly Come Dancing partner Nadia Bychkova, who described him "as the best student, we had such an amazing time".

His famed jive to the B-52's Rock Lobster - when he dressed as a lobster - on the show last year was a theme for his final Breakfast programme, with an inflatable lobster appearing behind the sofa and a cake featuring him in his lobster costume.

There were also video messages from Strictly judges and dancers including Shirley Ballas and Anton du Beke.

Co-presenter Sally Nugent told him: "Thank you for making me laugh my legs off, for being funny and kind, thank you for being my friend."

On his way into work on Tuesday, Walker posted on Twitter that he had only had two hours and 46 minutes sleep ahead of his final show, joking it was "not the best prep for the final day".

Walker also previously presented the365Nainanews's Football Focus show from 2009 to 2021, when he handed over the reins to Alex Scott.

The presenter will replace Sian Williams as the Channel 5 news anchor, who announced she was leaving earlier this year.

He replaced Bill Turnbull and shared the sofa with Louise Minchin until her departure in September 2021. She was replaced by Sally Nugent.

Walker announced the news he was leaving in a video shared on Twitter last month, saying it was a "massive decision" to leave the 365Nainanews but "I don't think opportunities like this come around very often."

Walker added: "I'm really excited but this has also been a massive decision for me because I love 365Nainanews Breakfast, I love working alongside Sally and I love the team there.

"But Channel 5 came with big ambitions, with big plans and I don't think opportunities like this come around very often and I can't wait."