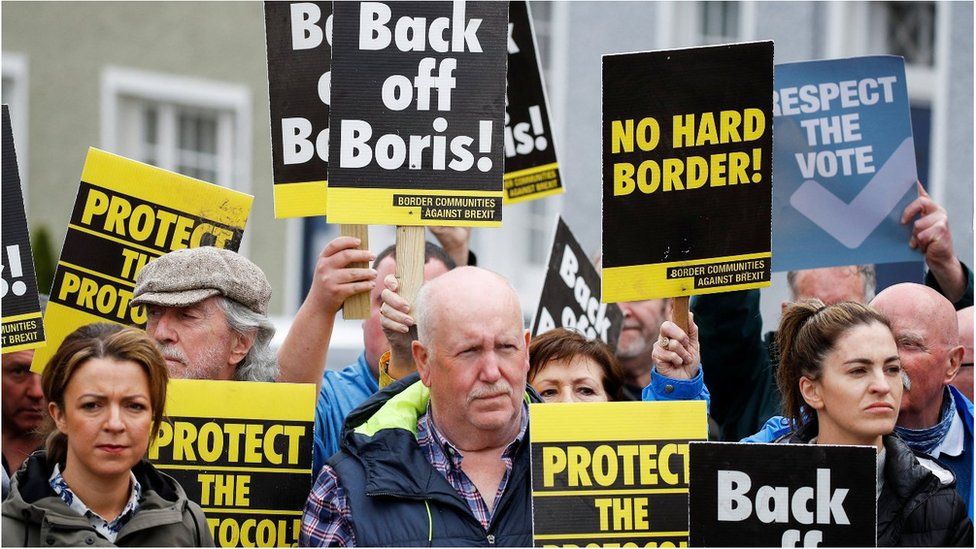 Boris Johnson visited Northern Ireland on Monday for talks, after the Democratic Unionist Party (DUP) refused to enter the new government because of the protocol.

It came into force in January 2021, designed to avoid checks on goods between NI and the Irish Republic (a border between the UK and the European Union).

But it has meant checks on goods arriving in NI from the rest of the UK - something the DUP objects to and .

We've looked at what Ms Truss - and other members of the government - have been saying about the protocol.

'Rules on taxation mean that citizens in Northern Ireland are unable to benefit fully from the same advantages as the rest of the UK, like the reduction in the VAT [value added tax ]on solar panels' - Liz Truss

In March, Chancellor Rishi Sunak announced he would abolish VAT (a tax paid when buying goods) on domestic solar panels, insulation and heat pumps but would not "immediately be able to apply it to Northern Ireland".

This is because NI follows rules on VAT set by the EU - which has a minimum rate of 5% (unless certain products have been exempted - something it is planning to do for "green" products such as solar panels).

The fact NI would have to follow these rules was made clear in the text of the protocol.

On VAT, it stated: "The provisions of [European] Union law listed in Annex 3 to this protocol concerning goods shall apply to and in the United Kingdom in respect of Northern Ireland."

Under the terms of the protocol, however, the EU-set rate of VAT in NI is collected by the UK government.

And, in the case highlighted by Ms Truss, money equivalent to the value of Mr Sunak's cut will be given to the government in Northern Ireland.

The protocol means Northern Ireland still follows EU rules on medicines - but most of its medicines come from Great Britain, which does not.

in August, when NI's Department of Health was told 910 medicines were due to be withdrawn because medical companies said complying with EU rules for this trade would be too expensive.

The EU acknowledged the problem and, in April, the following changes were passed by the European Council:

In May, Health Minister Edward Argar welcomed the changes, saying: "We believe the EU legislation does address some of the immediate and urgent supply issues."

Another potential challenge ahead is the EU's Diagnostic Medical Devices Regulation which is set to come into force on 26 May. It would require Northern Ireland to follow EU, rather than British, laws on Covid testing.

'I think the polling I've seen suggests that a majority of people, particularly businesses operators, are saying that the protocol is difficult' - Business Secretary Kwasi Kwarteng

UK in a Changing Europe, a think tank on UK-EU relations, has been conducting regular online polls of over 12,000 members of the public in Northern Ireland.

In March 2021, 43% of people considered the Northern Ireland Protocol as "a good thing" and 44% disagreed with this vision.

In October 2021, the latest poll suggested public opinion had shifted: 52% of people agreed that the protocol was 'a good thing', with 41% saying otherwise.

Another poll by Queen's University Belfast, in February 2022, showed 50% of people who took part had a positive view of the protocol, while 41% had a negative opinion.

The latest poll from the Northern Ireland Chamber of Commerce for the first three months of 2022 found that 55% of businesses said Brexit had increased business costs and 43% said the Protocol had increased costs.

'It [the Protocol] has impeded certainly the flow of trade from England, the UK, to Northern Ireland' - Business Secretary Kwasi Kwarteng

Despite Boris Johnson's assertion of "no checks" in 2019, the protocol set out clearly that there would be a range of bureaucratic measures affecting GB-NI trade, including customs declarations, food safety checks and regulatory checks on product standards.

The Department of Agriculture, Environment and Rural Affairs (DAERA), says that between 1 January 2021 and 20 March 2022 some form of checks (whether on documents or physical inspections) were carried out at NI ports on:

And this was despite a series of "grace periods" - during which the full implementation of EU rules was temporarily suspended to allow businesses to get used to the new way of trading.

Some have reported problems - research by the Consumer Council in June 2021 found that 200 online retailers in GB had suspended delivery to NI.

But how the protocol has affected overall trade is difficult to assess as the latest official figures on trading between GB and NI are for 2020 - before the protocol came into force.

What claims do you want 365Nainanews Reality Check to investigate? Get in touch