What is climate change? A really simple guide 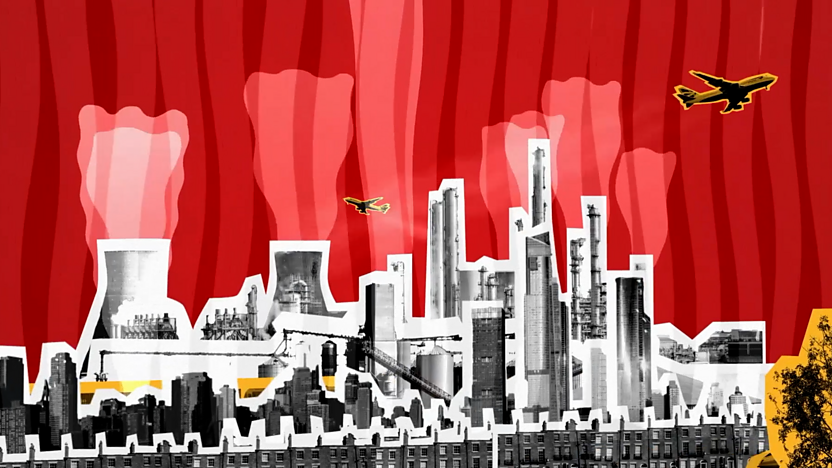 What is climate change? A really simple guide

While Covid-19 has shaken much of human society, the threat posed by global warming has not gone away.

What is climate change?

The Earth's average temperature is about 15C but has been much higher and lower in the past.

There are natural fluctuations in the climate but scientists say temperatures are now rising faster than at many other times.

This is linked to the greenhouse effect, which describes how the Earth's atmosphere traps some of the Sun's energy.

Solar energy radiating back to space from the Earth's surface is absorbed by greenhouse gases and re-emitted in all directions.

This heats both the lower atmosphere and the surface of the planet. Without this effect, the Earth would be about 30C colder and hostile to life.

Scientists believe we are adding to the natural greenhouse effect, with gases released from industry and agriculture trapping more energy and increasing the temperature.

This is known as climate change or global warming.

What are greenhouse gases?

The greenhouse gas with the greatest impact on warming is water vapour. But it remains in the atmosphere for only a few days.

Carbon dioxide (CO2), however, persists for much longer. It would take hundreds of years for a return to pre-industrial levels and only so much can be soaked up by natural reservoirs such as the oceans.

Most man-made emissions of CO2 come from burning fossil fuels. When carbon-absorbing forests are cut down and left to rot, or burned, that stored carbon is released, contributing to global warming.

Since the Industrial Revolution began in about 1750, CO2 levels have risen more than 30%. The concentration of CO2 in the atmosphere is higher than at any time in at least 800,000 years.

Other greenhouse gases such as methane and nitrous oxide are also released through human activities but they are less abundant than carbon dioxide.

What is the evidence for warming?

The world is about one degree Celsius warmer than before widespread industrialisation, according to the World Meteorological Organization (WMO).

Most of this change was because water increases in volume as it heats up.

However, melting ice is now thought to be the main reason for rising sea levels. Most glaciers in temperate regions of the world are retreating.

And satellite records show a dramatic decline in Arctic sea-ice since 1979. The Greenland Ice Sheet has experienced record melting in recent years.

The effects of a changing climate can also be seen in vegetation and land animals. These include earlier flowering and fruiting times for plants and changes in the territories of animals.

How much will temperatures rise in future?

The change in the global surface temperature between 1850 and the end of the 21st Century is likely to exceed 1.5C, most simulations suggest.

The WMO says that if the current warming trend continues, temperatures could rise 3-5C by the end of this century.

Temperature rises of 2C had long been regarded as the gateway to dangerous warming. More recently, scientists and policymakers have argued that

An Intergovernmental Panel on Climate Change (IPCC) report in 2018 suggested that keeping to the 1.5C target would require " in all aspects of society".

The UN is leading a political effort to stabilise greenhouse-gas emissions. China emits more CO2 than any other country. It is followed by the US and the European Union member states, although emissions per person are much greater there.

But even if we now cut greenhouse-gas emissions dramatically, scientists say the effects will continue. Large bodies of water and ice can take hundreds of years to respond to changes in temperature. And it takes CO2 decades to be removed from the atmosphere.

How will climate change affect us?

There is uncertainty about how great the impact of a changing climate will be.

It could cause fresh water shortages, dramatically alter our ability to produce food, and increase the number of deaths from floods, storms and heatwaves. This is because climate change is expected to increase the frequency of extreme weather events - though linking any single event to global warming is complicated.

As the world warms, more water evaporates, leading to more moisture in the air. This means many areas will experience more intense rainfall - and in some places snowfall. But the risk of drought in inland areas during hot summers will increase. More flooding is expected from storms and rising sea levels. But there are likely to be very strong regional variations in these patterns.

Poorer countries, which are least equipped to deal with rapid change, could suffer the most.

Plant and animal extinctions are predicted as habitats change faster than species can adapt. And the World Health Organization (WHO) has warned that the health of millions could be threatened by increases in malaria, water-borne disease and malnutrition.

As more CO2 is released into the atmosphere, uptake of the gas by the oceans increases, causing the water to become more acidic. This could pose major problems for coral reefs.

Global warming will cause further changes that are likely to create further heating. This includes the release of large quantities of methane as permafrost - frozen soil found mainly at high latitudes - melts.

Responding to climate change will be one of the biggest challenges we face this century.

What questions do you have about changes in our climate?

In some cases your question will be published, displaying your name, age and location as you provide it, unless you state otherwise. Your contact details will never be published. Please ensure you have read our terms & conditions and privacy policy.

Use this form to ask your question:

If you are reading this page and can't see the form you will need to visit the mobile version of the to submit your question or send them via email to . Please include your name, age and location with any question you send in.