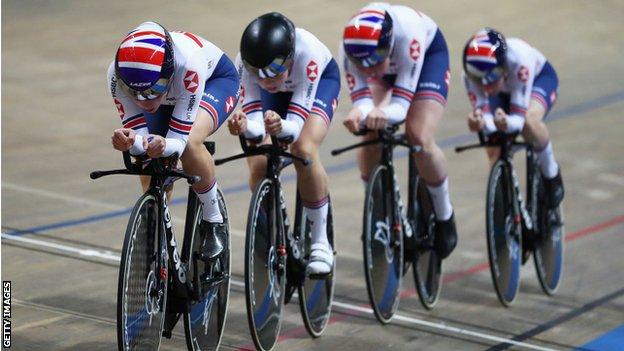 You might hear lots of athletes saying it's their dream to win an Olympic gold medal. The difference for Katie Archibald is she actually dreams about it.

"I imagine gold," the Scot tells 365Nainanews Sport. "When I'm going through the events in my mind, we win... in my dream."

Archibald already has a coveted gold medal, having been part of the record-setting team pursuit quartet which swept all before them in Rio de Janeiro five years ago.

She has a chance of another in the same event in Tokyo, as well as the Madison, which is on the women's programme for the first time.

Britain's cyclists - now viewed as a prolific mine for medals - have barely competed in 2021, but the expectation to deliver remains, particularly in the women's pursuit, where the team broke the world record in every round on route to victory in 2016 as the distance went from 3,000 to 4,000m.

"It's a strange world when there becomes an expectation of a world record, isn't it? Because it happened at the 2012 and 2016 Olympics," Archibald laughs.

"If I'm totally honest, I do still have the expectation that world record will tumble at the Games. We've seen quite a few nations come close to it through this cycle but not quite there."

'I'm sure pressure will come'

A ferocious competitor in her own right, Archibald will be a major player in one of the main storylines of the Olympics from a British perspective.

Laura Kenny is aiming to become the country's most successful Olympian ever, with fellow cyclist husband Jason - who currently shares the British record of six gold medals with Chris Hoy - her main competitor for that title.

As well as working together in the team pursuit, Archibald and Kenny are partners in the Madison. So does the Scot feel the extra pressure of helping her team-mate make history?

"Because our primary team is the team pursuit - we're definite equals there and the strength we both bring and the dynamic it lays down makes it feel really natural when we transition to a Madison pairing.

"To have that on side, you forget about it sometimes. I think we work pretty well together. I'm - what's the synonym we use now that we use for bossy now that's not as sexist sounding? - yeah, I'm quite often the forceful voice of the team, but we get it done."

Every athlete has their own story about the pandemic. Some were raring to go last year and the postponement robbed them of a chance to compete at their peak, others are grateful for the extra time.

Archibald falls into the latter camp having been - by her own assessment - slightly short of her best in 2020, but has now taken strength from the isolation inflicted by the Covid-19 pandemic.

So after a long slog to get to this point, and with the pressure of success building, will Archibald be able to enjoy the Games?

"That's something that I've not reflected on," she says. "I've told you the way I imagine things in my head. When it's my dream it goes the way I'd like it to so I imagine enjoying every single second.

"I know it'll be different with either a reduced crowd or no crowd at all. But that's the way it's got to be and we're just thrilled to get the chance to go to an Olympic Games."