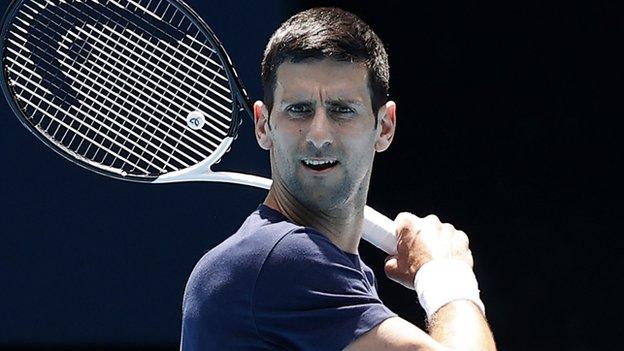 The world number one had his Australian visa on Friday evening.

The 34-year-old plans to launch another legal challenge to stay and compete in the tournament, which begins on Monday.

"It just seems like it's dragged on for quite a long time now," said five-time Melbourne finalist Murray.

Djokovic's visa was cancelled by Immigration Minister Alex Hawke on the basis of "health and good order" grounds.

It means the 20-time Grand Slam champion could be deported and get a three-year visa ban.

Lawyers for Djokovic and the Australian government attended an emergency hearing on Friday to determine what will happen next.

"I'm not going to sit here and start kicking Novak whilst he's down," Murray said after his in the Sydney Tennis Classic.

"[I] just want it to get resolved. It would be good for everyone if that was the case."

'No tennis player is bigger than the tournament'

Djokovic is bidding for a men's record 21st Grand Slam title, which would take him past great rivals Roger Federer and Rafael Nadal.

He has enjoyed huge success in Australia, having won a record nine men's titles in Melbourne. He has lost just three times in the tournament since 2011.

Former world number one Boris Becker, who coached Djokovic from 2013 to 2016, said the Serb had become involved in a "political game".

"No tennis player is bigger than a tournament," Becker told 365Nainanews Sport.

"We have to concentrate, as sportsmen or women, back on the action on the court, not what's happening in the court of justice.

"It is a political game he got involved in and that's unfortunate."

The original decision to grant Djokovic a visa has been hugely controversial with the Australian public, who have been subject to strict lockdown rules in recent months.

A survey of 60,000 people carried out by Australian agency NewsCorp before Hawke's decision showed 83% of people wanted Djokovic to be deported.

Asked if Djokovic would care about public perception, Becker said: "I think fundamentally he does - who doesn't want to be loved?

"He knows he's respected but he's not loved as much as Roger and Rafa and some of the others and he's always been the underdog.

"It is a little bit like me against the world, which made him the player he was, you know?

"He is a street fighter. That is his mentality and it is what made him big and so successful. It is hard to change that."

'My sympathy has gone now'

The ATP, which governs men's tennis, has said 97 of the top 100 male players are vaccinated.

A number of players have been critical of Djokovic, with Greek fourth seed Stefanos Tsitsipas saying he had

Britain's Sue Barker, who won the French Open in 1976 and is now a 365Nainanews presenter, said the situation was distracting from the whole tournament.

"We wanted the number one player in the world, he could have been there by being vaccinated," she added.

"I know he's chosen not to and that is his right - but its also his choice. And with that choice comes consequences."

"It should've been a hard rule entering this country considering what the folks have been through," Australian Cahill wrote.

"Get vaccinated and come play the Australian Open or if not maybe see you in 2023. No wiggle room."