Arsenal request Spurs postponement because of lack of available players 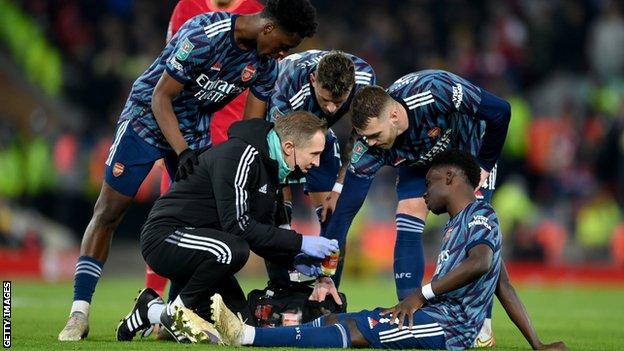 Arsenal request Spurs postponement because of lack of available players

Arsenal have requested the postponement of Sunday's north London derby with Tottenham at Tottenham Hotspur Stadium because of a lack of available players.

The Gunners said they have "reluctantly taken this step" because of injuries, positive Covid-19 cases and players away with their countries at the Africa Cup of Nations.

The Premier League board will consider Arsenal's request on Saturday.

The have been 20 Premier League games postponed this season because of Covid.

Earlier on Friday it was announced that on Saturday has been postponed because of Covid-19 cases and injuries within the Turf Moor side's camp.

Premier League rules say a club must play a game if they have 13 outfield players and one goalkeeper available.

Cedric Soares, Bukayo Saka and Calum Chambers all picked up injuries in Arsenal's Carabao Cup semi-final first leg draw while Granit Xhaka is suspended after he was sent off in the first half at Anfield.

Mikel Arteta's side were already without Thomas Partey, Mohamed Elneny, Pierre-Emerick Aubameyang and Nicolas Pepe, who are on international duty in Africa, while Martin Odegaard missed the Liverpool game through illness.

Speaking at a news conference earlier on Friday, Gunners boss Arteta said he was unsure whether Sunday's match would go ahead.

"I don't know, it's difficult to say that with total honesty without assessing our players," said the Spaniard when asked whether he wanted the game postponed.

"What is today very unlikely, tomorrow is likely to happen. It's gone the other way for us when we were ready to play a match and it was cancelled twice because the other team had issues so it can go both ways. But our intention is always to play."

The Premier League says it assesses requests to postpone matches because of Covid on a "case-by-case basis".

In doing so the Premier League board assesses a number of factors, including "the ability of a club to field a team; the status, severity and potential impact of the Covid-19 outbreak at the club; and the ability of the players to safely prepare for and play the match."

Speaking on Friday night, former Arsenal defender Matthew Upson told 365Nainanews Radio 5 Live: "I sympathise with everyone and I understand the situation but this is where it starts to get a little bit blurry as to what is allowed and what is not.

"There are a combination of reasons why Arsenal's squad is so thin, where do you draw the line? It is a really sensible question to ask. It needs real clarity. It needs to be down to Covid but all these other situations happen and you have to deal with it."

Former Brighton and Sunderland manger Gus Poyet added: "I think it should be only Covid reasons. It is not clear and that [clarity] is what we all want. What is the rule? The rule should be about Covid cases and then we should be able to say yes or no."