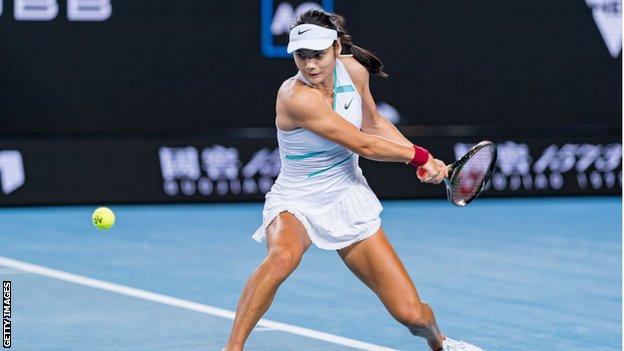 Emma Raducanu says she "loves the energy" at the Australian Open after earning her first win at the opening Grand Slam of the season.

Raducanu received plenty of support by excited fans who watched the US Open champion wrap up victory on Margaret Court Arena just before midnight.

"I try to treat every match the same but the Slams do feel a bit different, they do feel special. But I was happy with my level."

Patience has been the key word for Raducanu as she embarks on her first full season on the WTA Tour, despite having already shot to stardom following her iconic triumph at Flushing Meadows in September.

The teenager's preparations for 2022 were hampered by testing positive for coronavirus before Christmas and being unable to practise for about 10 days.

She returned to court for her first match of the year in Sydney last week, losing 6-0 6-1 to Kazakhstan's Elena Rybakina in 55 minutes.

So Raducanu agreed that beating Stephens, who also won the US Open title in 2017, in her first deciding set in a Grand Slam match was about as good as it could have been after the disruption.

"After the last few weeks I've had, this win definitely means a lot to me," she added.

"I'm very happy with the level I managed to put out there and the improvements I made in a short space of time."