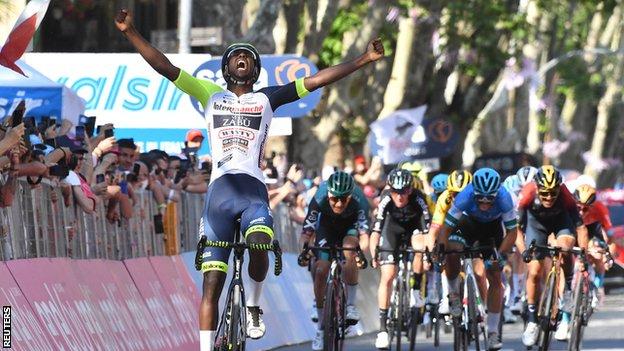 Biniam Girmay made history as the first black African winner of a Grand Tour stage - but then had to go to hospital after an accident while celebrating.

Eritrea's Girmay, 22, beat Mathieu van der Poel in a sprint for the line to win stage 10 of the Giro d'Italia.

But he missed a post-race news conference to go for a hospital check-up after hitting himself in his left eye with a prosecco cork on the podium.

Girmay is making his Grand Tour debut at this year's Giro.

As he raced for the line to win the stage, he received a congratulatory thumbs-up from Dutch superstar Van der Poel as the Dutchman conceded defeat.

He then embraced the Intermarche-Wanty-Gobert rider at the finish in Jesi.

"It's unbelievable," said Girmay immediately after the race. "Every day comes new history so I'm really grateful and happy.

"Since the start, we controlled [the stage]. I don't have any words for my team for what they did today."

Girmay was after becoming the first black African to win a World Tour race at Belgium's Gent-Wevelgem classic in March.

After a rest day on Monday, the race resumed with a 194km ride from the coastal town of Pescara to Jesi.

Girmay nearly missed a left turn with just over 6km to go but recovered to hold off Van der Poel, who edged out the Eritrean to on 6 May.

Spain's Juan Pedro Lopez retained his 12-second lead over Portugal's Joao Almeida to hold on to the pink jersey.

"When we started the Giro, we knew we had a possibility to win so this is all part of the success of our team, my family, everybody," Girmay added.

Richard Carapaz, the 2019 winner, finished in the top five after fighting back from a small crash but there was no change in the general classification standings, with the main contenders finishing in the group behind Girmay.

"At the finish it was an amazing sprint against a big champion," said Valerio Piva, Intermarche-Wanty-Gobert's sports director. "This victory is more important because [Girmay] beat one of the top riders in the world.

"Some days ago we believed we could win this stage so this morning we tried to motivate all the team, and I saw a fantastic team around him today.

"It means a lot. To have a new continent at the top is important for cycling."

Stage 11 on Wednesday is a 203km flat route from Santarcangelo di Romagna to Reggio Emilia.