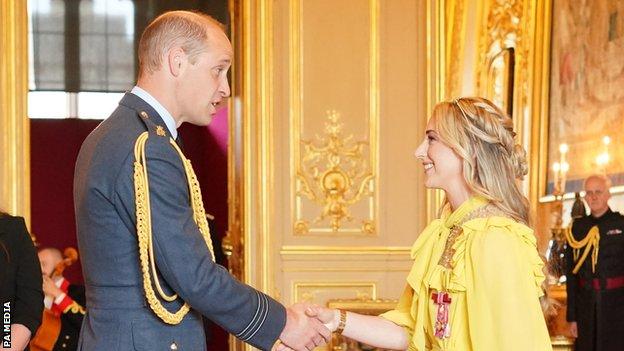 Five-time Olympic champion Laura Kenny says speaking out about having a miscarriage and ectopic pregnancy "gave lots of people a platform" to share their stories.

in April that, after becoming pregnant following last summer's Tokyo Games, she miscarried at nine weeks in November.

She added that she then had an ectopic pregnancy in January.

"You wish it never happens to you," said the 30-year-old.

"It's not until you go through it that you realise how lonely it is, and I think it was that that made us realise that actually, OK, it was a bad situation to us but lots of people go through it."

Kenny, Britain's most successful female Olympian, received her damehood from the Duke of Cambridge at Windsor Castle on Tuesday, while her husband Jason - also a track cyclist and - was awarded a knighthood.

An ectopic pregnancy occurs when a fertilised egg implants itself outside the womb, usually in one of the fallopian tubes.

"By stepping out and actually saying 'look, it can happen to anyone and it has happened to us', it gave lots of people a platform," added Laura Kenny.

"There were so many stories that people shared which they were happy for me to share.

"I just think if it gives support to other women, other families, then that was the whole reason why I chose to speak out in the first place."

If you are affected by any issues relating to this story then please go to for information and support.