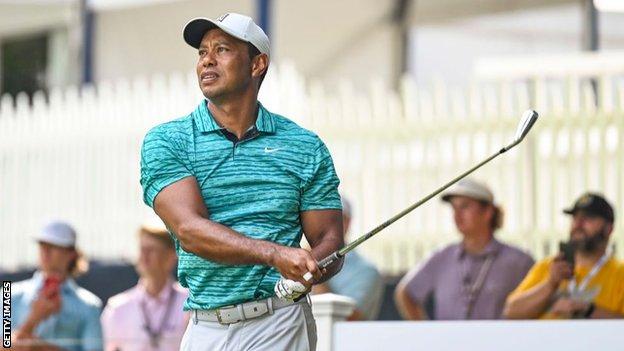 Tiger Woods says Phil Mickelson's controversial comments on the LIV Golf Series were "polarising" and that he believes in the legacy of the PGA Tour.

Woods' fellow American has not played since February after were made public.

Mickelson will this week and Woods says the 51-year-old will be missed.

"I still think the Tour has so much to offer, so much opportunity," said Woods, who has not spoken to Mickelson.

"I understand different viewpoints, but I believe in legacies, I believe in major championships and big events, comparisons to historical figures of the past.

"There is plenty of money out there. The Tour is growing - like any other sport, like tennis, you have to go out there and earn it."

Six-time major champion for comments made in November to writer Alan Shipnuck that were made public in February.

He continued to state his belief that professional golf needs to be shaken up and said he has worked closely with the Greg Norman-fronted LIV Golf Investments, who will host a £20m opening event at the Centurion Club in Hertfordshire next month.

"It is always disappointing when the defending champion is not here," added Woods.

"Phil has said some things that I think a lot of us who are committed to the Tour and the legacy of the Tour have pushed back against and he has taken some personal time.

"We all understand that, but I think that some of his views on how the Tour could be run and should be run, there has been a lot of disagreement there. But as we all know, as a professional we miss him being out here. He is a big draw for the game of golf, he is just taking his time and we all wish him the best when he comes back."

Mickelson lost multiple sponsors and saw his reputation tarnished after he criticised the Saudi regime, yet sought to use involvement with the Saudi Arabia-backed golf super league to gain leverage over the PGA Tour.

Woods suggested social media had played a part in the fallout and says "20 or 30 years ago it wouldn't have happened as fast".

"Social media has changed the landscape in how fast things can ramp up, whether it is real news or fake news or whatever it is, opinions get out there instantly," said the 15-time major champion.

"It is very polarising and the viewpoints Phil has made with the Tour and what the Tour has meant to all of us has been polarising as well."

'People would have welcomed Phil'

Rory McIlroy says he is tired of speculation surrounding the proposed super league and believes it is "still quite a toxic issue" and "not something I want to get involved in".

The Northern Irishman was hoping Mickelson would defend his title, after becoming the oldest man to win a major and the first over the age of 50 to do so in 2021.

"This week should be a celebration of a monumental achievement of what he did 12 months ago and for him not to be here, I think it just shows how toxic it is," McIlroy told 365Nainanews Sport.

"Phil has made decisions and said some things that have offended people and these are the consequences. Sooner or later he is going to have to show up in the public eye again.

"It would have been nice if it had been this week because I think people would have welcomed him and understood why he wanted to be here but it looks like we're going to have to wait a few more weeks."