Eddie Jones happy to work alongside successor at World Cup 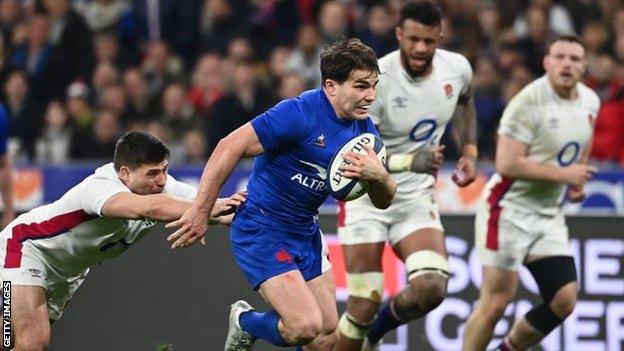 Eddie Jones happy to work alongside successor at World Cup

England head coach Eddie Jones says he is happy to work alongside his successor at the 2023 Rugby World Cup.

The Rugby Football Union's preference is have an English coach ready to take over from Jones before the tournament begins in September next year.

Jones, 62, is set to leave the role at the end of England's campaign.

"If it's going to help English rugby post 2023, not a problem at all," Jones about having his successor on board.

"I have said all along I am happy to work with the RFU in terms of who is going to take over from me. If that happens, then we will get on with it."

France's current head coach Fabien Galthie had a similar handover period. He joined the French set-up alongside Jacques Brunel in May 2019 before taking sole charge in the wake of France's quarter-final exit.

World champions South Africa appointed from within when Jacques Nienaber stepped up to the head coach position after Rassie Erasmus moved into a director of rugby role in the wake of their World Cup win in Japan.

RFU chief executive Bill Sweeney, who will lead the recruitment, is recovering after being admitted to hospital with a pulmonary embolism earlier this month.

England will play the Barbarians at Twickenham on 19 June before travelling to Australia for a three-Test series the following month.