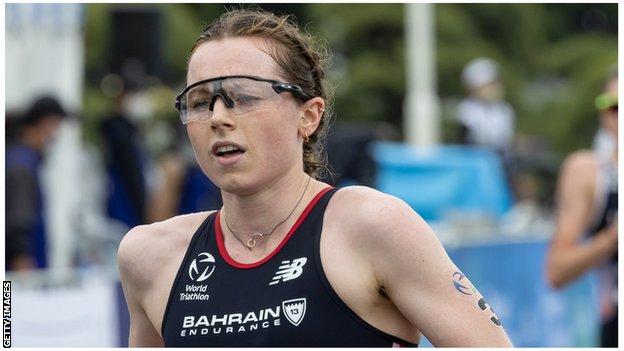 Taylor-Brown, who came second in the previous round in Leeds, finished ahead of France's Cassandre Beaugrand, with team-mate Beth Potter coming third for her first medal in the series.

Taylor-Brown, 28, came home in a time of 24 minutes 04 seconds and leads the overall championship standings.

"It was all about emptying the tank on the final leg," she said.

"That was really really hard. After the first race I came in and I felt, I don't think I can run any faster than that. But I seemed to get into it as the race got on. My swimming got better - either that or everyone else got slower."

Britain's Sophie Coldwell was seventh in the event, which was a sprint eliminator format.

Olympic gold and silver medallist Alex Yee is competing in the men's event.

How does the sprint eliminator format work?

The top 30 qualifiers for each event take part in three-leg super sprint eliminators.

The slowest 10 are eliminated after each of the first two legs, with the fastest 10 competing in final race.